U.S. sanctions on Syria have been in place since 1979 and have been largely ineffective. Despite the U.S. expansion of measures in 2004 and 2011, regional supporters of the Syrian government and President Al-Assad have helped these parties maintain power and have resulted in the displacement of and human rights abuses against the Syrian people.

As Syria approaches a decade of conflict, the U.S.’s next move to address these human rights abuses and Bashar’s al Assad’s government lies in the Caesar Syria Civilian Protection Act (Caesar Act).  Legislation so named after the pseudonym used by a Syrian military officer who leaked more than 50,000 photos documenting torture and other human rights violations and atrocities in al-Assad's prisons. Receiving bipartisan support and passed in December 2019, the Caesar Act comes into force on 17 June 2020. According to the U.S. Ambassador to the U.N. Kelly Craft, “Our aim is to deprive the Assad regime of the revenue and the support it has used to commit the large-scale atrocities and human rights violations that prevent a political resolution and severely diminish the prospects for peace.”

However, as sanctions programs are generally aimed to deter bad actors, what makes the Caesar Act so different?  According to Julien Barnes-Dacey, a director of the Middle East and North Africa program at the European Council of Foreign Relations (ECFR), “[t]he new US sanctions will be far broader in terms of their sectoral targeting, [it] will involve US targeting of other countries and businesses seeking to do business with the Syrian government in a bid to ensure Syria's tightening economic isolation."  Further to this point, Ibrahim Olabi, a British barrister who founded the Syrian Legal Development Program contributed, “the US is using [the new sanctions] to deter countries from doing business with Syria … [t]he US has recognized that Syria is a proxy arena for all the elements they’re targeting.”

Unlike, the threats of secondary sanctions that tend to intimidate external parities from supporting sanctioned regimes, the Caesar Act targets these regional supporters head on. Regional neighbors, Lebanon and Iraq, are already experiencing the impact of the new sanctions on their domestic economies. Lebanon is seeing “full-blown economic implosion and rousing civil unrest; Iraq … is combating low oil prices and crumbling revenues elsewhere.” According to reports, the U.S. views these regional collapses and hyperinflation as proof that these measures are working as they are addressing the bad actors at issue.  However, what many analysts and reports are highlighting are concerns over the impact these measures will have on the civilians in the region.  In this period where a global pandemic has sent the world into a recession and may – as the World Bank estimates - “push as many as 60 million people into extreme poverty”, is now the right time for these measures?

Evaluating the appropriateness of implementation considering the global state of affairs requires international leaders to weigh the cost and benefit of this new sanctions tool on a country and region already struggling from the pandemic. Additionally, should these measures be successful in Syria, would a version of this sanction be applied to other countries like Iran, North Korea, and/or Venezuela, particularly as more shipping-related sanctions evasion tactics are uncovered? If these measures are extended to other regions, what does that mean for the civilians living in those countries?  Frankly, what measure of success – if any – would engender international support? Conversely, if these measures prove to contribute more to the humanitarian crisis rather than help, as is intended, at what point does the UN or the rest of the world, intercede?

From Wednesday, the act will target supporters of the al-Assad government in politics, business and banking, reaching all the way to Lebanon's Hezbollah and partners in Iran, Russia and even Gulf states and Europe, with individuals potentially facing travel bans or even arrest. 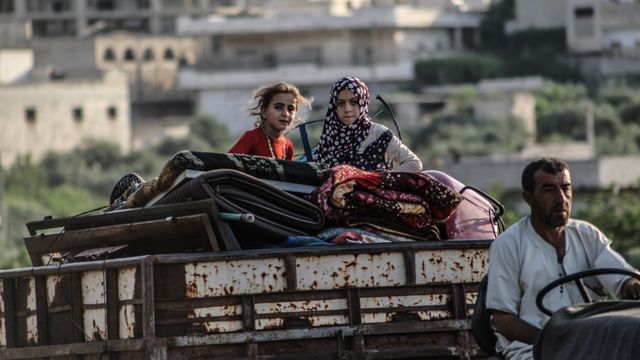 How will new US sanctions on Syria be different? https://t.co/uLnRTDVePP pic.twitter.com/hxZV3QKq2h

The Caesar Act brings most severe sanctions ag regime since start of Syrian civil war but will also have chilling effect on civilians in Syria & Lebanon. @AJEnglish https://t.co/znnt8LyAVy

Comment: The Caesar Act's purpose is noble, but with the economy in ruins and Russia waiting in the wings, more sanctions risk entrenching Syrian misery, writes Sam Hamad https://t.co/QRvIp3EBEK

"Anyone doing business with the Assad regime, no matter where in the world they are, is potentially exposed to travel restrictions and financial sanctions."